We are renovating the beautiful period features and upgrading the facilities, so that the Alexander Centre can take its place at the heart of the community. It is a place for local business and leisure activities, weddings and training courses, classes, fairs and support groups.

Under the direction of leading interior designer, Sue Timney, and leading architect, Nigel Lee Evans of the award-winning Lee Evans Partnership. The Alexander Centre’s historic rooms have been restored in calm, heritage paint shades. The 20th century annexe, Gatefield Hall is re-furbished as ‘Danish modern’ in keeping with its modernist roots and today’s contemporary trends.

Its ground floor rooms include the largest indoor venue for hire in the area, plus three other elegant period rooms. Its upper floors are available as affordable office rentals to start-ups, charities and other organisations.

Under the management of the CIC, the Alexander Centre will continue to support the local economy and be a place for Faversham to be proud of.

The history of Sir Sidney Alexander 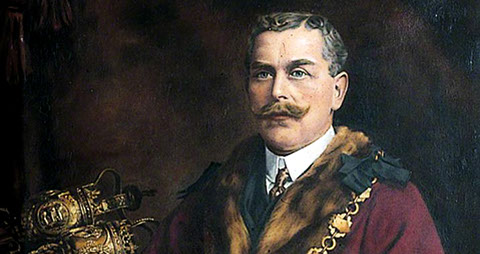 Sir Sidney Alexander was a local GP and the longest-serving Mayor of Faversham. His mayoralty, from 1910-1920, included the First World War. He attended the Coronation of King George V in 1911 as Faversham Baron of the Cinque Ports.

He was also a pioneer in varicose vein surgery! Although he also worked in London, his main GP practice was at Gatefield House, now the Alexander Centre, where he lived until his death in 1943.

The Alexander Centre was built in the 1860s as Gatefield House, a private house for Henry Barnes, who made his fortune as a brickmaker. Later, it became the residence of the celebrated doctor, Sir Sidney Alexander, who was Faversham’s longest-serving Mayor. After Sir Sidney’s death in 1943, it was bought by Faversham Borough Council for use as Municipal Offices. Faversham’s crest ‘since I wield arms for the King, I am a free port’ is built into the portico, as evidence of Faversham’s Cinque Port status.

When Faversham Borough Council was incorporated into Swale Borough Council, the council continued to own and run the building until it was handed over to The Alexander Centre CIC, an independent, autonomous, not-for-profit organisation, in a government asset transfer. The CIC is an independent autonomous Community Interest Company. Swale Borough Council continues to maintain one office in the building, to support the community. The Alexander Centre is also the home of Faversham Town Council who have their offices and the impressive Victorian Mayor’s Parlour in the building.

Meet the Directors
& Board Members

The Trust is hugely grateful for the ongoing support of the following people and organisations:

Lee Evans Partnership LLP is one of the leading architectural studios in the South East and has also been nominated as one of the UK’s Top 100 Architectural Practices for three years running.

Situated just beyond the end of Abbey St you will discover the growing "village" centred around Faversham Garden Centre & Tea Rooms.

Worked in Britain, Europe and Japan for over 30 years creating interior projects celebrating her own brand of exotic classicism under the Timney Fowler and Sue Timney banners.

Chavereys was formed in 1998 by Martyn Crawley and Richard Davis who at this time were two of the managing partners of Reeves and Neylan, the largest accountancy practice in Kent.

The Alexander centre made us so welcome as a tenant. We used this as a temporary beauty salon after experiencing a significant fire. We stayed for 15 months all of which we were very well looked after by the friendly helpful staff. It was a real struggle to leave and return to our original premises as we were made to feel so at home and nothing was ever too much trouble. Thank you Ali and team for all your help and support. I will be forever grateful and feel so privileged to experience working in an amazing beautiful building.